Step 4: What is privilege?

"Privilege" is the advantage certain groups have in society based on how closely they conform to what society considers the “norm.” For each group with privilege there are other groups that are disadvantaged or even oppressed. Recognizing one's level of privileges allows one to use that privilege to help those who are at a disadvantage.

Privilege (video below) - Explores the invisible system of racism and white privilege which exists in the United States.

"I can chose blemish cover or bandages in "flesh" color and have them more or less match my skin..." plus 49 other situations the privileged can count on. Read more 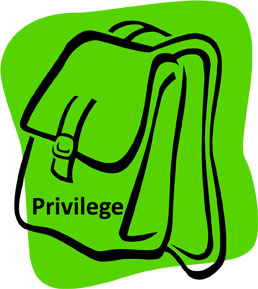 The Right Hand of Privilege

The Right Hand of Privilege poses the question: "Do we live in a right-handed or left-handed world?"

Back to Step 3
Next > Step 5
Home > Cultural Competencies